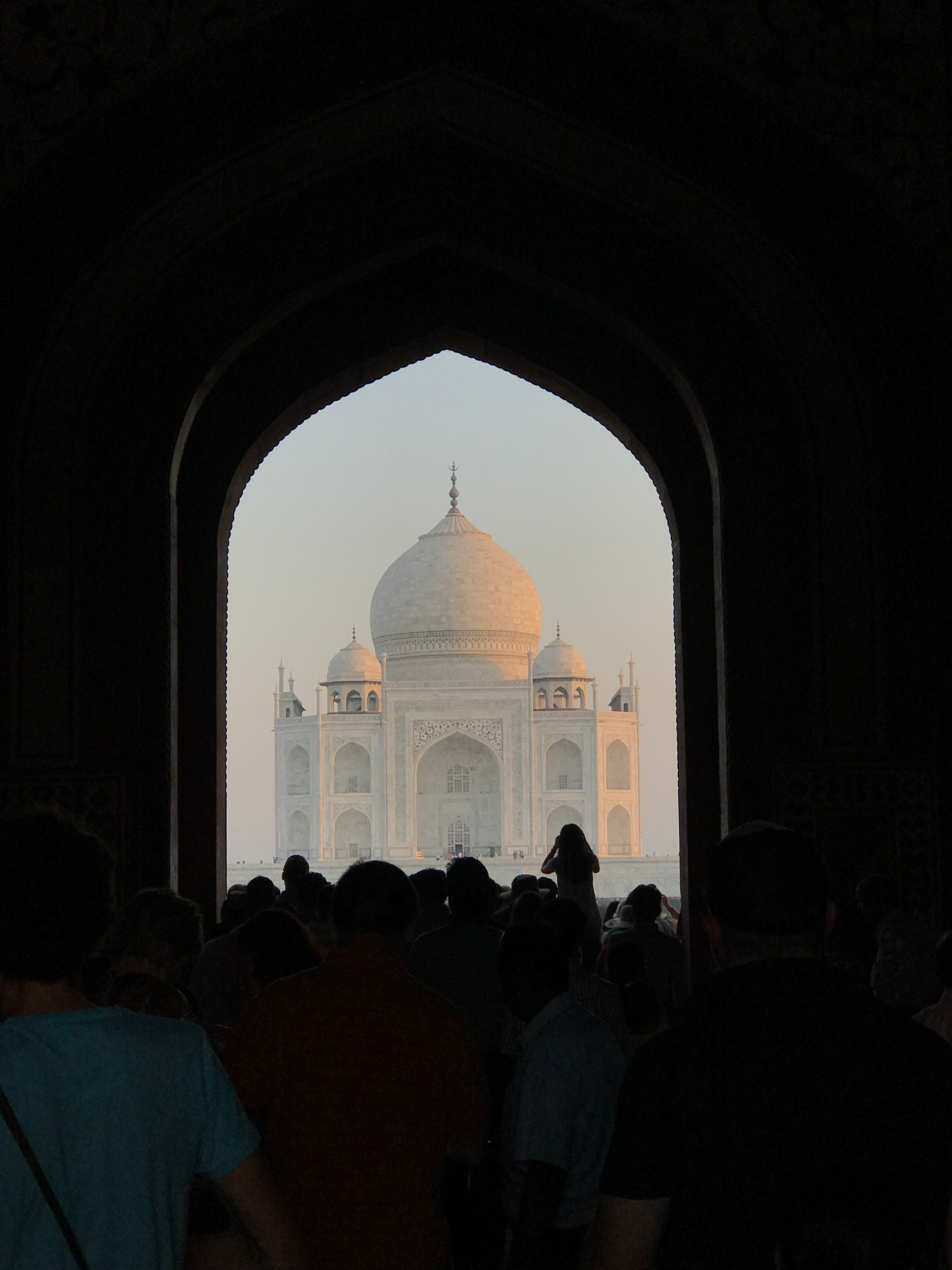 Behind schedule (due to our tardy train) we loaded up our taxi van, and began the drive to Agra. Although only 220 (ish) Km From Delhi to Agra, the expected drive time is roughly four hours. If you, like me, are asking "why so long??" The exaggerated time gives allowance for traffic (and cows) on the road.

On route to Agra, I found myself sneezing uncontrollably. With an itchy mouth to match, I assumed allergies. I ignored my sniffles, refusing to allow "whatever they are" to ruin our holiday.

Our goal was to make it to Agra before sundown so we could watch the sunset against the Taj Mahal from the gardens (the mythical home of the black Taj Mahal).

As we reached our destination, the city of Agra was a alive in festive spirit for Devali. Streets throughout the city were closed for precession. Hence, it became impossible to reach the gardens.

A little disheartened (and even more annoyed at the overnight train) we rerouted for our hotel. As our car pulled into the hotel gates, our mouths dropped with astonishment- our home for the night "The Grand Imperial, Agra" was absolutely beautiful.

Inside, we were blessed in traditional Hindi fashion: a bouquet of flowers around our neck, a red marking on our forehead, and served a welcome drink.

Before being shown our room, we were guided throughout the property. The heritage hotel once was a grand palace.

Getting comfortable, was no grand feat. Our room was fit for an emperor, from the back french doors opened to the pool. To relax, T, lounged by the pool and I workout in the neighbouring courtyard.

While I was sweating my buns off, T made friends with a newly wed Indian couple, who had come to Agra to see the Taj Mahal as a couple. 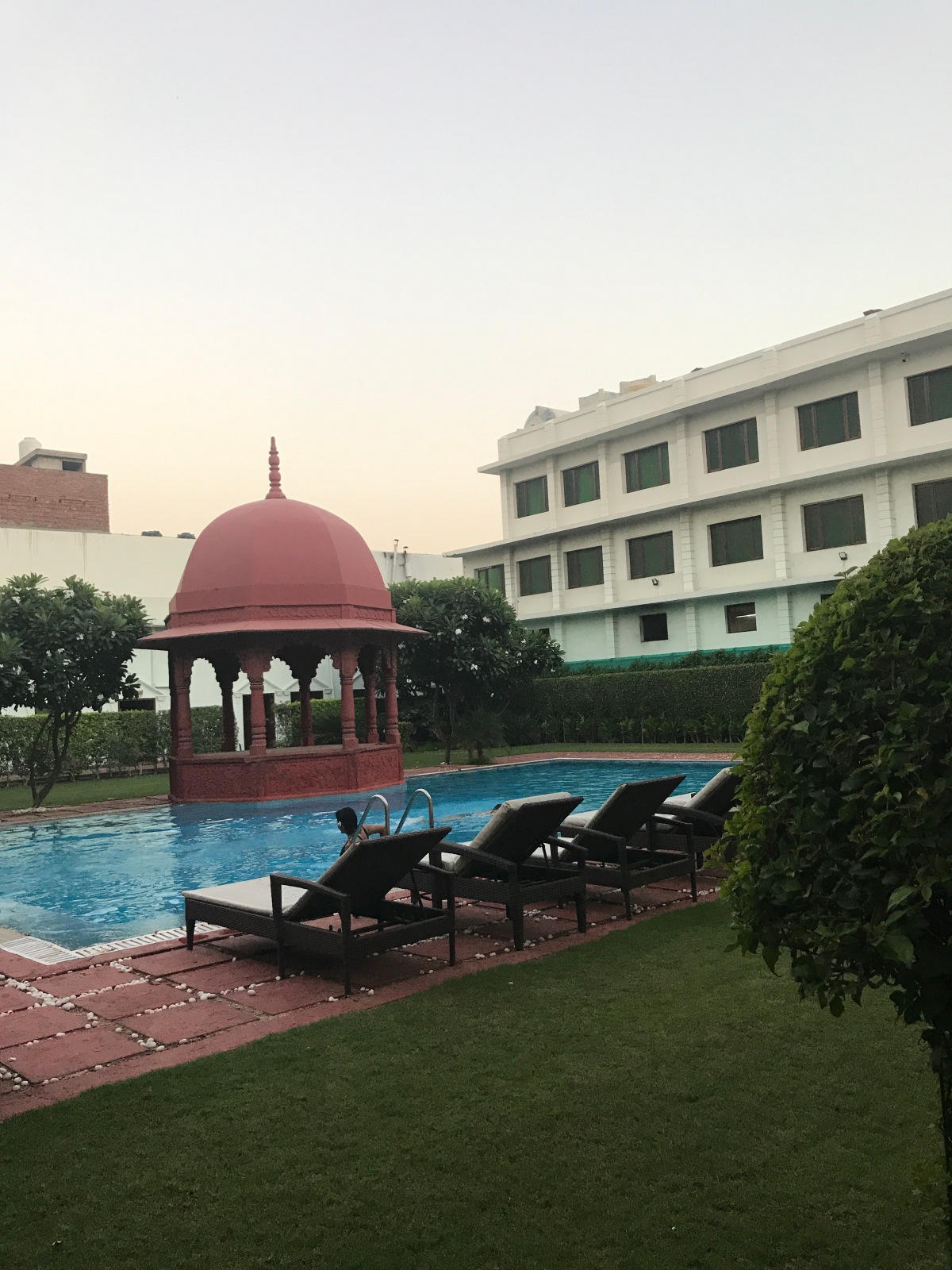 Après dinner our new friends invited us for drinks, and we invited them to share our 5:15 am taxi to the Taj Mahal. We said goodnight and before we knew it the four of us were packed into the cab headed for India's most iconic tourist attraction, the Taj Mahal.

Our itinerary was to arrive at the Taj Mahal for sunrise. Allowing us to avoid the worst of the crowds, and to skip the scorching heat.

On first glance, it became evident why the Taj Mahal is one of the worlds seven wonders. It truly is no more, or less, than paradise. T and I were both dumbfounded by the ingenuity, symmetrical perfection, the grandeur, and utter beauty of the monument.

As the crowds began to boil, and the sun began to smoulder we made our exit. It was back to the hotel for breakfast, a swim, and to pack up.

With the return of the taxi, we said adieu to our new friends. Hastily, we were swept away to the Red Fort, and the palaces that hid behind its fortified walls. For centuries the Red Fort houses the mogul rulers of Agra. Pop culture
wise, the Red Fort is best known for being the prison of Shah Jahan (the man who built the Taj Mahal). In a "small" palace quarter he spent his last decade of life, under house arrest, in-prisoned by his own son. 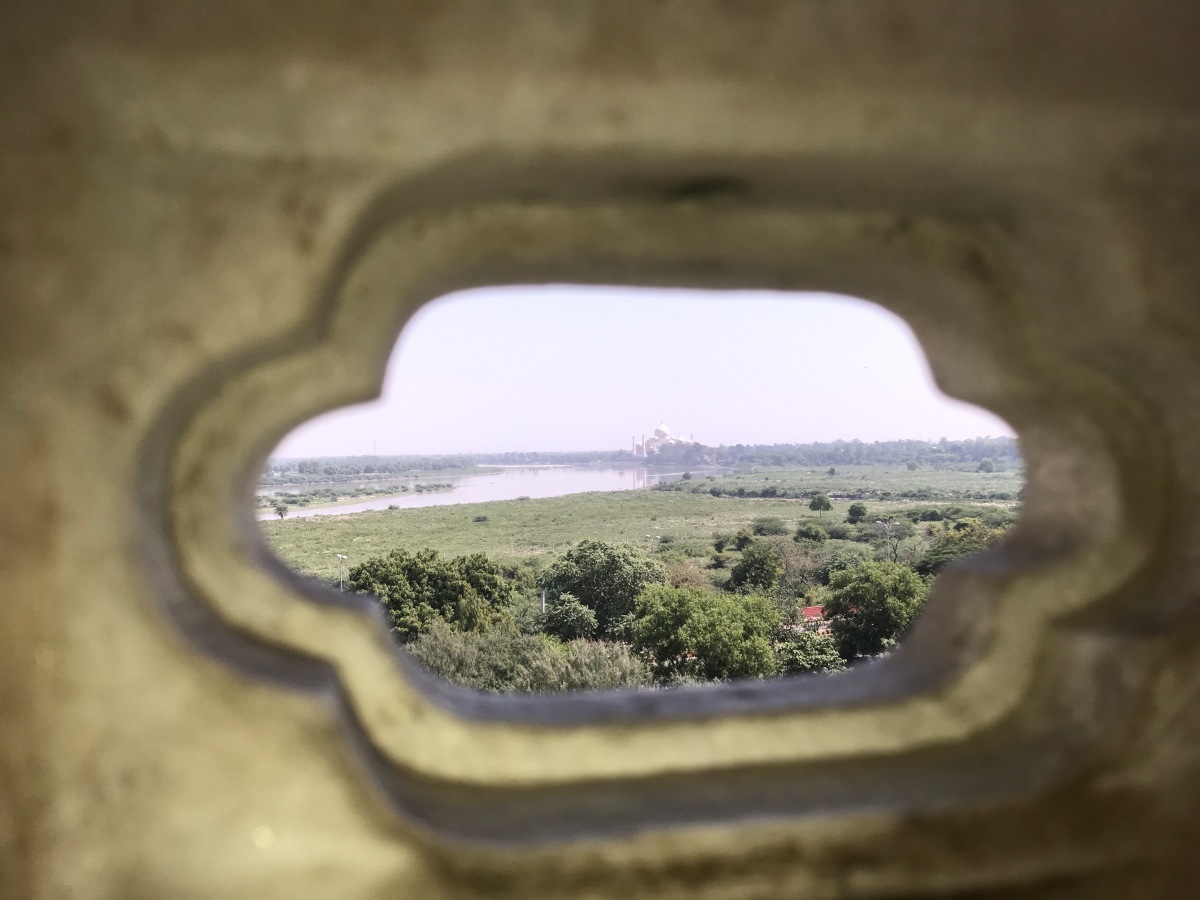 Both the Taj Mahal and the Red Fort are exquisite. The ornate marble that decorated the outer walls is artisan crafted marble inlay. Designs are carved in the marble, and decorated with both semi and precious gems to
look like a museum worthy watercolour.

The last stop on our busy day in Agra was a stop at historic artisan house famous for marble inlay. There we watched as artists worked in a traditional fashion.

Our day in Agra, was too short! We wanted to stay longer. But it was on Jaipur for us.

In Agra, you must: