Whether Banff is new on your radar or you’re a frequent visitor to the majestic mountain town, there is one annual event hosted by Banff Sunshine Village that you simply can’t miss #SlushCup90. This year, the annual end of the ski season long weekend will be splashing skiers and snowboarders May 19th to 21st.

Since the resort first opened in 1928, Banff Sunshine has been ending their ski and snowboard season with one final, and dare I say monstrous, SPLASH.

Rumour has it, Banff Sunshine Village’s Slush Cup was conceived on a simple dare. Between two friends.

One where the dare-er, Cliff Whyte ( a local Banff legend) upon accepting the challenge of skiing across a melting pool/creek of water asked his good fried Cyrill Paris to “please hold my beer.”

Cyrill, ever the dutiful friend, laughed as he complied. As Cliff tucked down the hill, Cyrill shook his head in disbelief. Cringing at what he was sure would result in carnage. We’re told that time slowed as Cliff sped his way to the semi-frozen ice water below. When his ski met the water, his tips drove up as he sat back and rode out the melting stream.

Up top, Cyrill was surprised to find his shirt drenched in the local brew. (But that will happen when you start screaming and jumping with a full pint in hand.)

Over the years, Sunshine Village’s Slush Cup has morphed from a campy end of season party for staff, to a wet and somewhat wild three day weekend for skiers and snowboarders to commemorate the shred season.

As a snowboarder, Slush Cup Long Weekend is one of my favorite weekends of the ski and snowboard season. For the seasonal team members on a working holiday visa, and the weekend warriors, Slush Cup is a lot like Senior Prom. 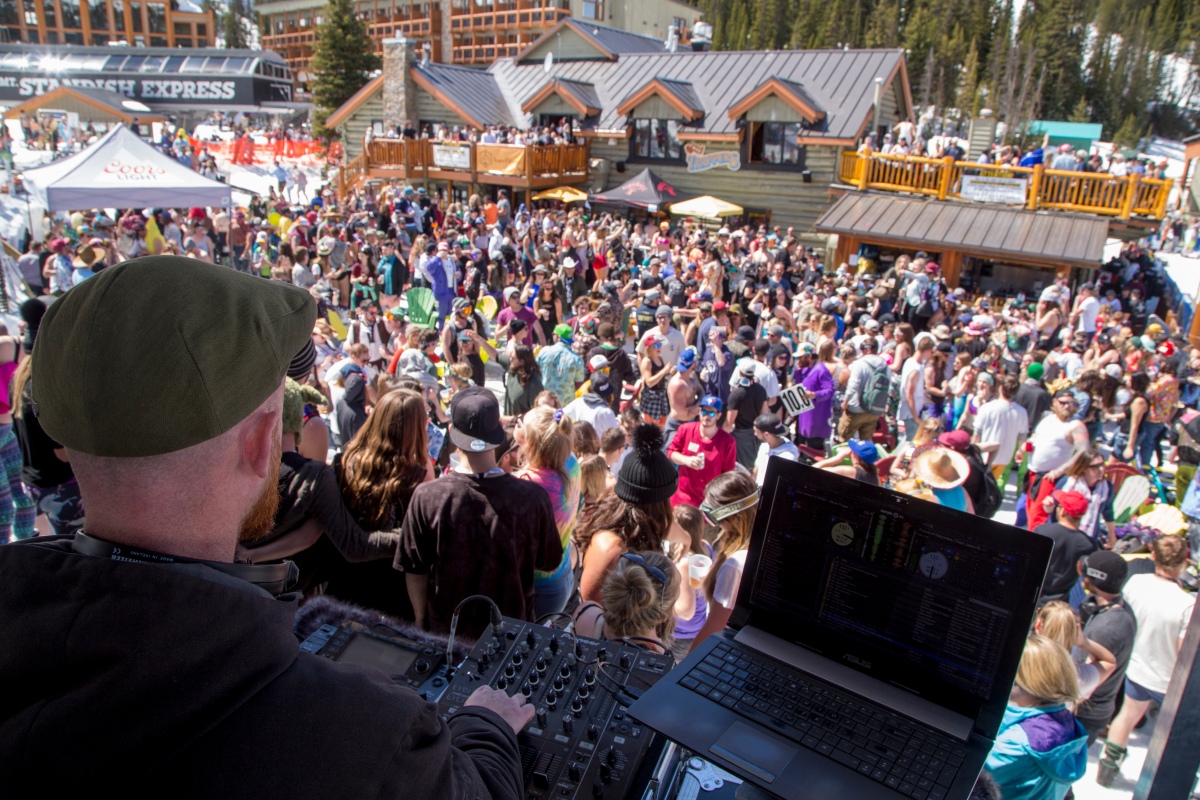 Like Senior Prom, Slush Cup is the last chance to celebrate winter fun with new and visiting friends before everyone goes their separate way for the summer. The day, as wild and fanatical it is, is sweetened with a note of melancholy. One the entire town of Banff tries to ignore as they toast to the moment, and more importantly the best season of their lives. 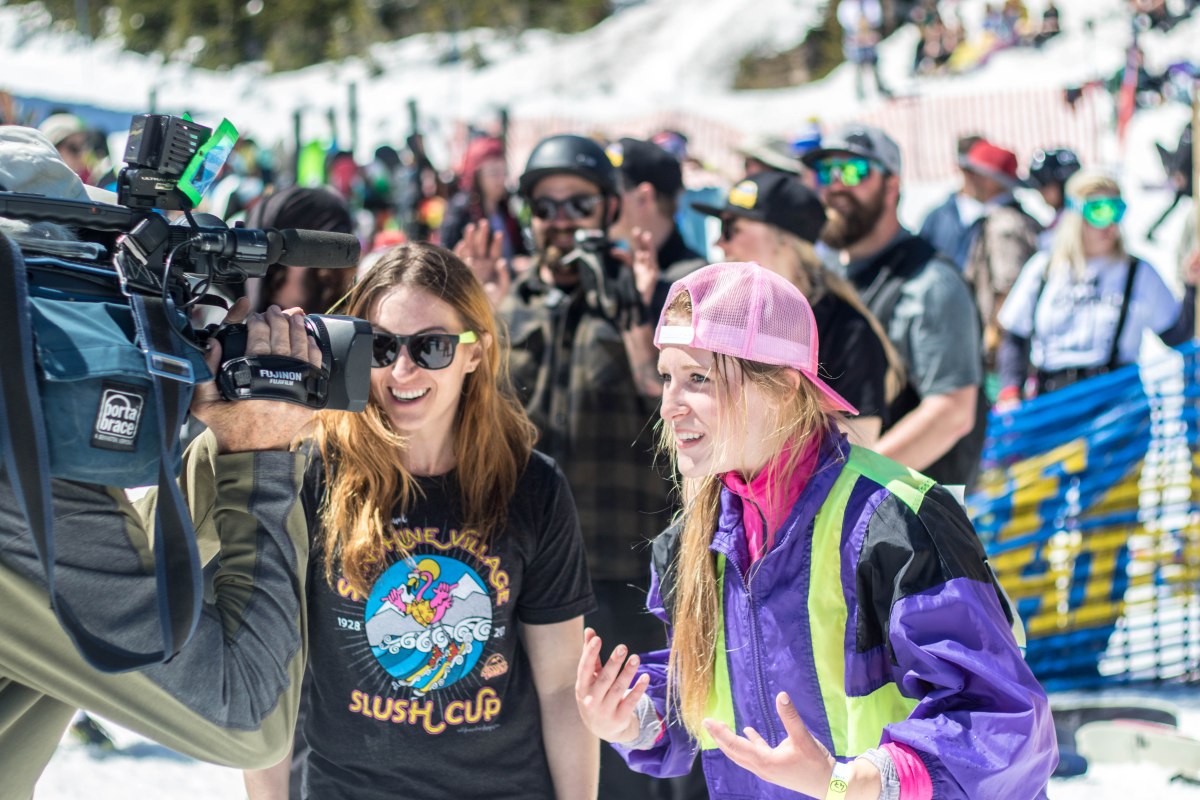 Today, the curious and adventurous spirits of Cyrill Paris and Cliff Whyte lives on at Slush Cup Long Weekend. The resort has added to its Slush Cup event roster by adding new events, The SlushShine Rail Jam (on Saturday, May 19th) and The Watergate Banked Slalom (on Sunday, May 20th). Each year, it seems Sunshine asks, “How can we make this party bigger and better??”

This year, being Sunshine’s 90th birthday, the resort is going all out! With concert performances by Busty and the Bass, live party boards, drink specials, and cold hard cash prizes to accompany the crowning of the 2018 Mr. and Ms. Slush Cup.

If you’re heading up to Slush Cup, the place to stay is Sunshine Mountain Lodge. Especially if you have hopes of taking a swim in the slush cup pool. Staying on mountain will give you an edge on scoring a bib. The event fills up fast, and the earlier you are – the better your chance at making it in.

Saturday May 19th: The Slush Shine Rail Jam, An open rail jam event open to skiers and snowboarders. At The SlushShine Rail Jam, rails and boxes from the terrain park are set up over a giant pool of nearly frozen slushy mountain water.

Sunday May 20th: The Water Gate Banked Slalom, Like its name suggests, this water augmented race course has both gates and pools of water that skiers and snowboarders must race through.

Monday May 21st: Slush Cup 90, The marquee event of the long weekend for both participants and spectators. For the competitors, 70 or so lucky ones will be given a bib and the marching orders to hike up “Slush Cup Hill.”  Once up top, they’ll line up in order as the patiently wait for their turn – trying to suss out the competition and figure out what works. When their number is called, they’ll head to starting line and begin their tuck towards the Slush Cup Jump. Their mission is to hit the jump, stick the landing and clear the 100 + foot pool of melting ice water.

Over the years, Slush Cup has had the who’s who of skiing and snowboarding enter the event. Including Olympic Silver Medalist in Ski Cross, Brittany Phalen (Ms. Slush Cup 2015). 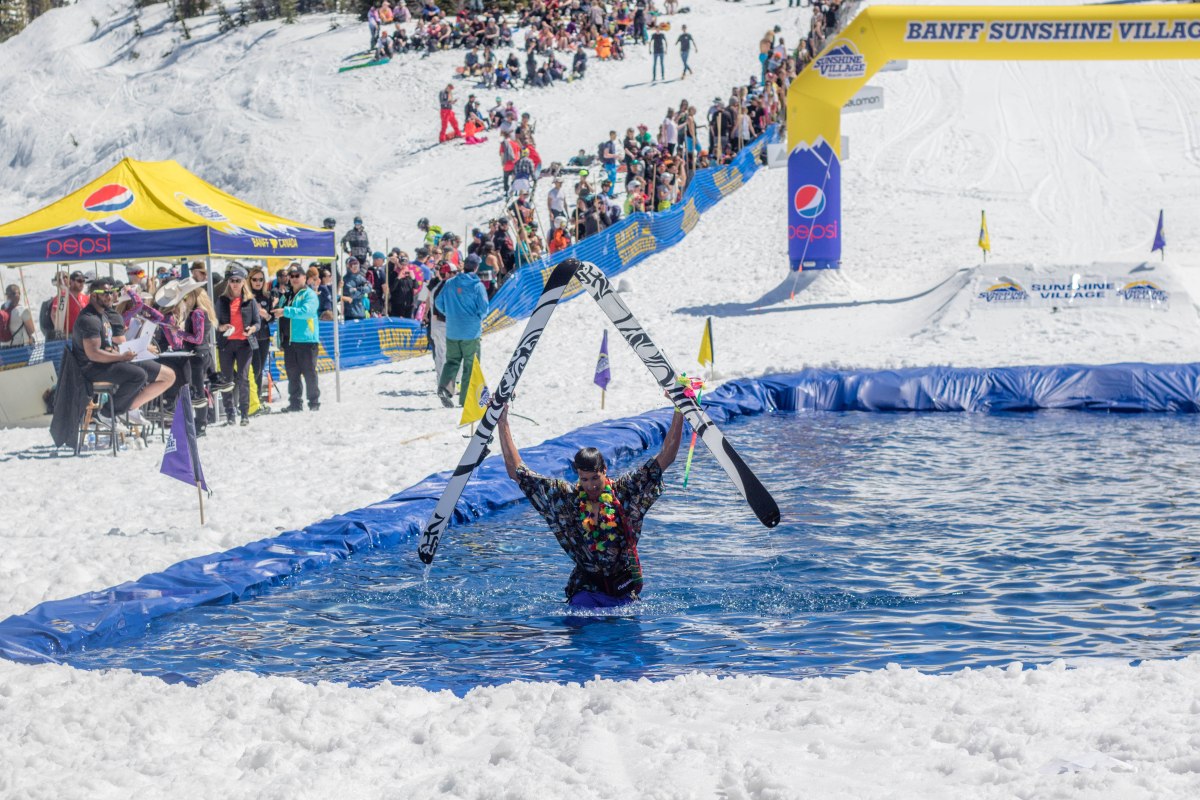 Slush Cup is the spectators favorite. A friend once told me, “what’s not to love about Slush Cup!? I mean you get to watch people bail, over and over; and then you get to cheer real loud when someone makes it!”

And I couldn’t agree more. From the costumes to the atmosphere, to the lively entertainment, Slush Cup Long Weekend is one “splashing” good time.